THE ORIGINS & MILESTONES OF OPTICAL EFFECTS FOR THE GIANT-SCREEN CINEMA 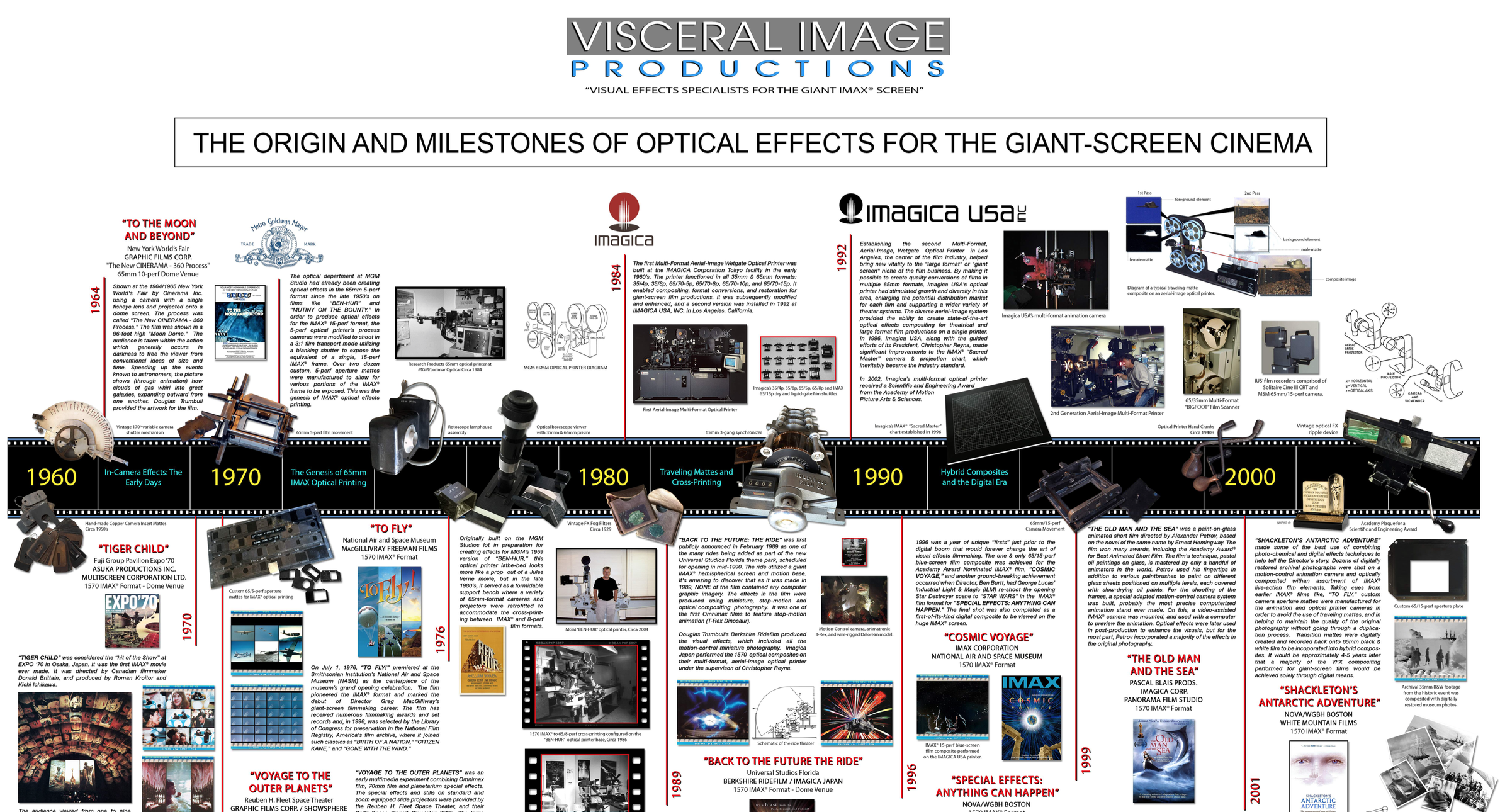 Click to Download Full PDF
In March of this year, the Giant Screen Cinema Association (GSCA) held its inaugural Filmmaker Symposium event as part of its annual 2015 Film Expo in Los Angeles, California. In addition to the dozens of Presenters speaking about a variety of topics ranging from giant-screen production & post-production technology to the business of giant-screen, the event also hosted an informal trade show for vendors and suppliers to showcase their wares. I decided to do something a little different.
The Filmmakers Symposium drew a diverse crowd of Industry professionals, as well as students and individuals who had very little experience working with film, or digital means of capturing images for the giant IMAX®  screen, and since the emergence of digital capture has surpassed film capture in a number of ways, I thought it would be beneficial for existing and new members of the GSCA to discover how optical effects production got its start in the giant-screen world, mainly IMAX®.
My filmmaking career began in the late 70’s when visual effects was on the verge of a break-out where films like “STAR WARS” and “CLOSE ENCOUNTERS OF THE THIRD KIND” were deep into production. After working in a New York Optical House for two years, I decided to pack my bags and head out West where films like these, and other effects-laden productions were on the rise, and to see if I could entrench myself within the FX Community. During the following four decades, I would hold a variety of positions at dozens of VFX production houses, including my own, but the arena I enjoyed most, and still do today, is the art of VFX primarily designed & produced for the giant IMAX® screen (aka “large format” cinema).
My specialty was in the field of optical effects, a technique simply explained as the combining of visual elements from separate sources into single images, often to create the illusion that all those elements are parts of the same scene. That basic principle can be applied to a number of ways to achieve the same outcome, but the two that mostly applied to the early days of filmmaking for the giant-screen cinema is an in-camera effect whereby multiple exposures were made by recording on only one part of each film frame, rewinding the film to exactly the same start point, exposing a second part, and repeating the process as needed to complete the image. The resulting image is a composite of all the individual exposures. The second most common method of compositing falls under the category of matting, or optical effects where the process requires compositing two different film elements by printing them, one at a time, onto a duplicate strip of film via a camera apparatus know as an optical printer. After one component is printed on the duplicate, the film is rewound and the other component is added. Since the film cannot be exposed twice without creating a double exposure, the blank second area must be masked while the first is printed; then the freshly exposed first area must be masked while the second area is printed. This method is commonly noted as an optical composite.
Over the course of 35 years, the art of creating optical effects for IMAX® films is a fascinating story, combined with ever-changing technology that continues to advance right up until the time you are reading this blog. The timeline of events chart I created illustrates a magical  journey I feel privileged to have been a part of, and as I continue my own journey, I can’t help but wonder where the art of VFX filmmaking will be in another 35 years from now.

As Visual Effects Producer and Founder of Visceral Image, Alan’s expertise spans over 35 years specializing in creating VFX content for 2D & 3D giant-screen IMAX® films and Special Venue projects. His “hands-on” experience working as a VFX Supervisor and Cinematographer in the field of optical printing, animation, and matte-painting laid the foundation for a natural progression into the digital realm over 15 years ago, and as a VFX Producer to successfully interface with VFX Supervisors, Directors, Producers, and the technical personnel that desire to create the ultimate, immersive viewing experience. With a long list of successful IMAX® feature film credits on his resumé, Alan has set the bar for achieving & maintaining the “gold-standard” caliber of filmmaking that is essential for the giant screen experience.

Visceral Image Productions began delivering outstanding visual effects to Giant Screen Productions in 2005 and is proud to have brought wonder and magic to over 20 adventures.